What Homer Simpson Strip Teaches Us About Social Media Conversations

For many years, I lived in Decatur, Georgia, and knew it as a haven for food and drink lovers. There were, and still are, plenty of places to satisfy nearly any culinary craving.

One of the places I used to frequent was a small shopping complex lovingly nicknamed “Homer Simpson Strip.” The name was fitting because there was a pizza restaurant next to a craft beer store, two doors down from a doughnut shop.

Now that I live a good 5,000 miles away from the strip, I thought I would reflect on how each of these small businesses approached their social media marketing and which ones managed to expand their reach.

Back in the day, I visited Avellino’s every once in a blue moon with friends when we dared to try Il Divolo, a pizza so spicy, it came with a warning from the waiter/waitress.

So while this isn’t Moe’s Tavern, Homer could probably make himself at home here and enjoy a slice.

What they can teach you about social media conversations

Unfortunately, Avellino’s online presence for their Decatur location is rather minimal, with a long-abandoned blog and sporadic posting on Facebook. They appear to rely more on locals patrons and word-of-mouth to get new customers.

If growth and engagement is the goal, the last thing you want to do is let your social pages turn into a graveyard. While there isn’t a magic number for the number of times per week or day to post on social, it’s better to do it more often than almost never.

If you’ve never been to Decatur, there’s one word to describe what this area is known for. Beer. It’s a craft beer connoisseur’s dream, with pubs, and of course, shops within walking distance of many of Decatur’s neighborhoods.

Ale Yeah! has one of the largest craft beer selections I’ve ever seen with plenty of wine, meats, and cheese too. And their employees know beer, which makes them incredibly popular in the neighborhood. Homer would be quite happy here.

What they can teach you about authenticity

Where Ale Yeah! shines is in their communication style. While their posts aren’t the sleekest, they make up for it in frequency, and the owner of the shop interacts with commenters in almost real-time. It’s been a real joy to read these comments throughout the years and see the love this shop gets from the local community.

When they opened, I initially followed them on Facebook to stay up-to-date on their latest craft beers. Even though I no longer drink beer due to allergies, I’ve never had the heart to unfollow them because of all of the interesting products they continue to stock.

So you don’t necessarily have to go big with your social marketing to build a following. But what you do need is an authentic voice. Ale Yeah! manages to bring the experience one would expect in their store into their conversations online.

I’m sure that if Homer were real, Revolution Doughnuts would be in trouble, and sadly, probably go bankrupt because of how much he would eat. And it would be well deserved—not the bankruptcy part—because the doughnuts are just that good.

Honestly, I still follow them online because their handmade cake doughnuts are so ingrained in my mind. They are true perfection.

Not only does Revolution have an amazing product, but they are extremely active on social media. They’ve also positioned themselves to gain national attention by being featured in several local and national magazines.

What they can teach you about building a tribe

Revolution Doughnuts has a very devoted following of fans, some of whom drive from neighboring states just to satisfy their sweet tooth. I’ve always been impressed by the quality of their doughnuts and how they treat their online presence.

From the warm, personable tone of their posts to beautiful imagery used, everything is extremely consistent and planned out. They have a strong brand that you can see in their marketing, including the clever names created for their doughnuts. Who wouldn’t want to try a “Crunchy Mister” or “Orange Dream Pie”?

This attention to detail is what helps to build a loyal following and keep them engaged. It’s also an example of how you can have the best product in the world, but without a cohesive brand and effective marketing strategy, it’s harder to grow as a business.

As Revolution Doughnuts continues to flourish in Atlanta, I hope they eventually expand into other cities in the southeast. Over the years, I’ve noticed an increase in requests from people asking if they can open a shop in other states. Some of them from even as far away as New England.

The Strip Always Has a Place in My Heart

Now that I live far from the strip, it might be a while before I’m able to return to Georgia again, thanks to the Coronavirus and travel restrictions. But until then, I’ll keep watching what the shops and restaurants are doing with their social media conversations and continue cheering them on from afar.

You’re in the right place. Let’s talk about your next campaign. 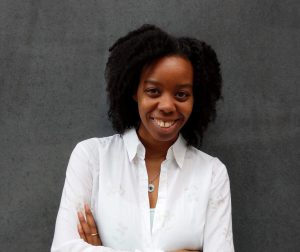 Hi there, I’m Teni! If you’ve made it here, you obviously enjoy food, health, and content, right? Here you’ll find musings on how B2B food and beverage businesses can tell better stories that resonate with their readers. Heck, you might even find a few pop culture references from the ’80s and ’90s sprinkled in here too. Oh, who are we kidding? You will.